After another day's work; 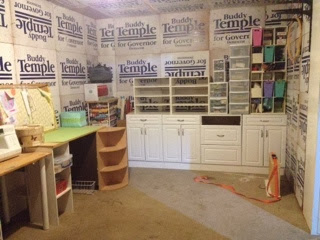 That's the storage side. The missing drawer is having it's face re-glued.
Here are my cutting and sewing tables. They're different heights for comfort. 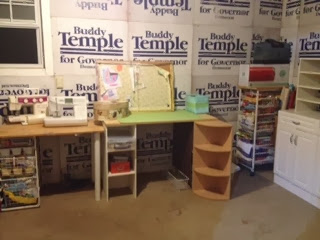 Look! See that window?
Here's what I have left to put away. Not bad, considering. 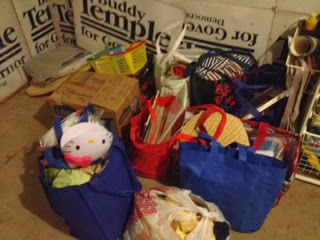 I have also learned that Buddy Temple and I attended the same college, The University of Texas. He and his wife, a former educator and Member of the UT Board of Regents, currently reside in Lufkin, TX. He lost the May primary to Mark White, who went on to unseat incumbent Bill Clements. Buddy got 402,693 (30.54%) of the primary vote and declined a runoff primary. This was the end of his political career.
Mark White, incidentally, was a one-termer who was not reelected due to overly conservative policies, a weak economy and poor connection with minority voters. My brother remembers him only as the 'stupid governor who banned recess' thereby making elementary school a miserable six years, two years longer than White held his gubernatorial throne. White also publicly opposed Texas A&M leaving the Big XII for the SEC, a move I refer to as 'taking our toys and leaving the playground and ruining Thanksgiving for all of The Great State of Texas for years to come.'
And a happy Thanksgiving Day to you all, even though we didn't get to beat the Aggies.